Sacred Heart of Jesus and Mary prints beautifully framed picture with decorative floral border framed in gold and black frame
Thank you for visiting my Etsy store where you will find gifts and décor items reflecting faith, hope and love for yourself, friends, family and co workers. 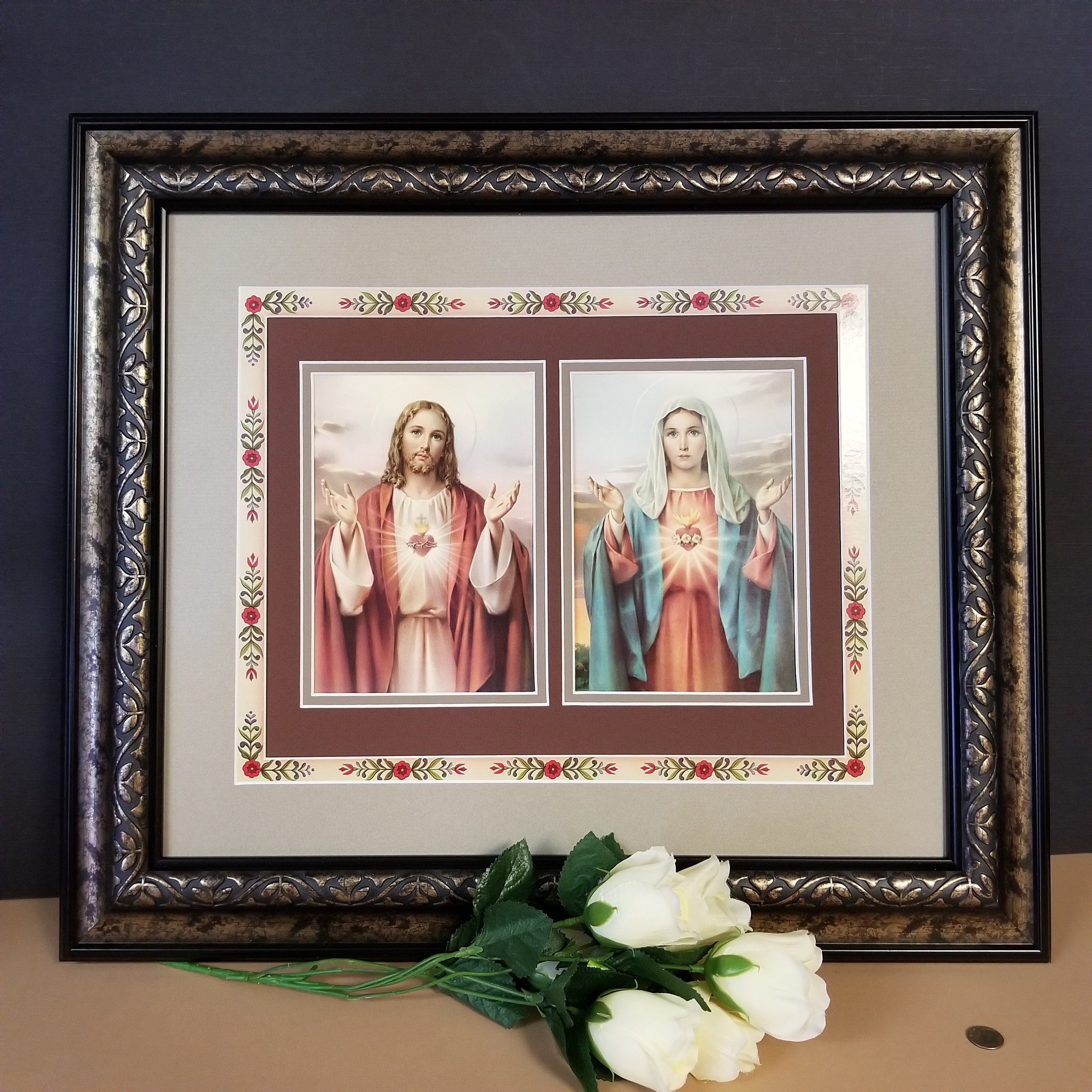 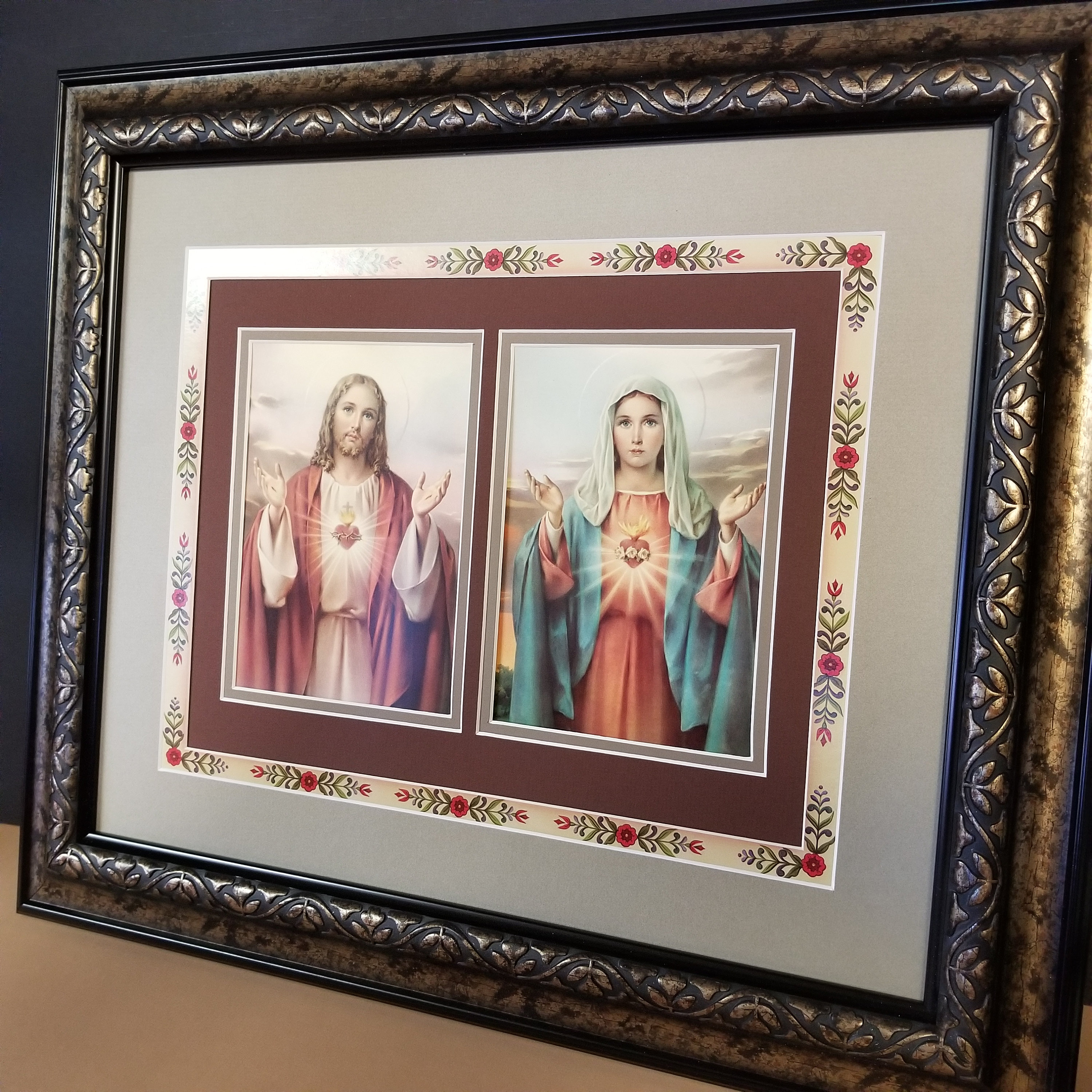 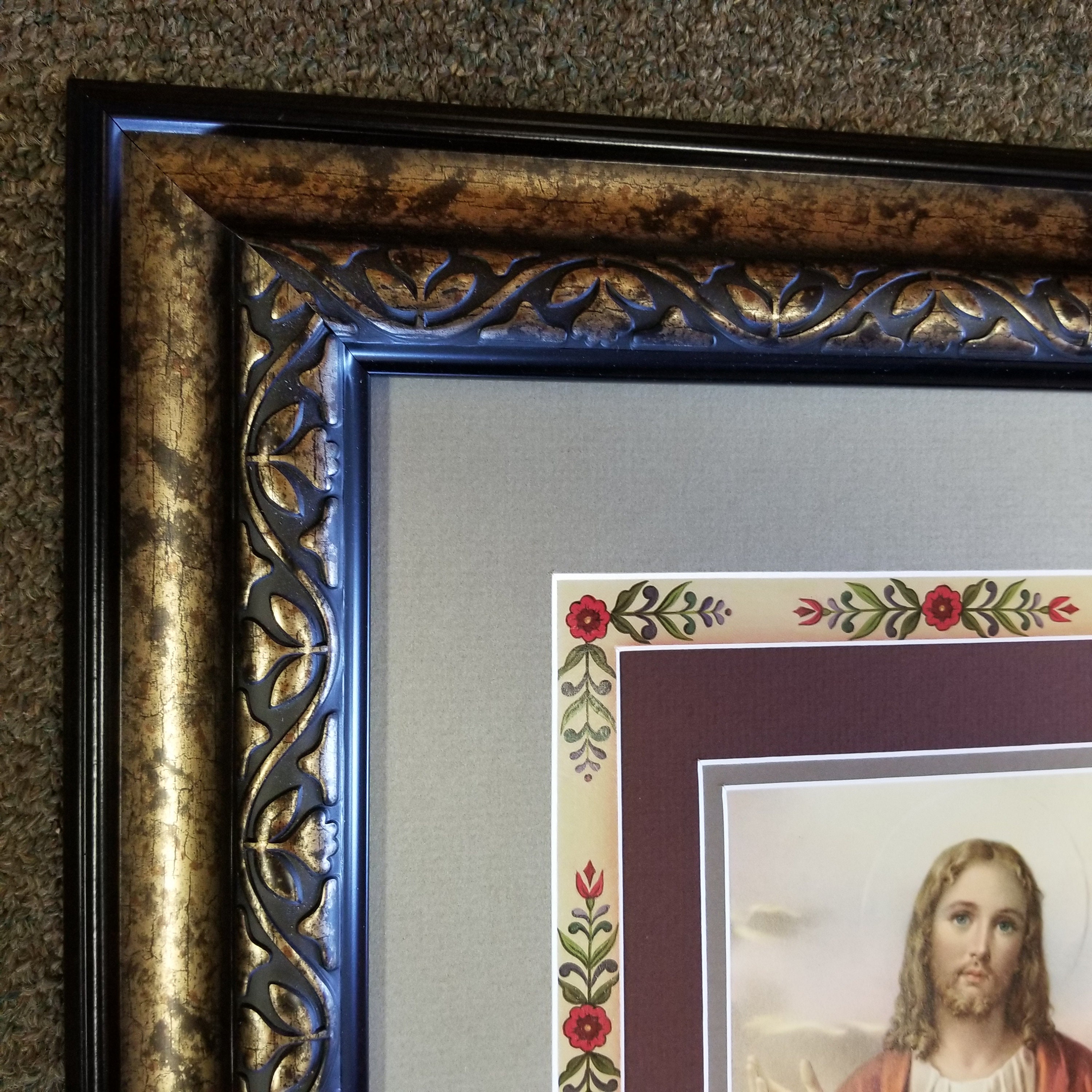 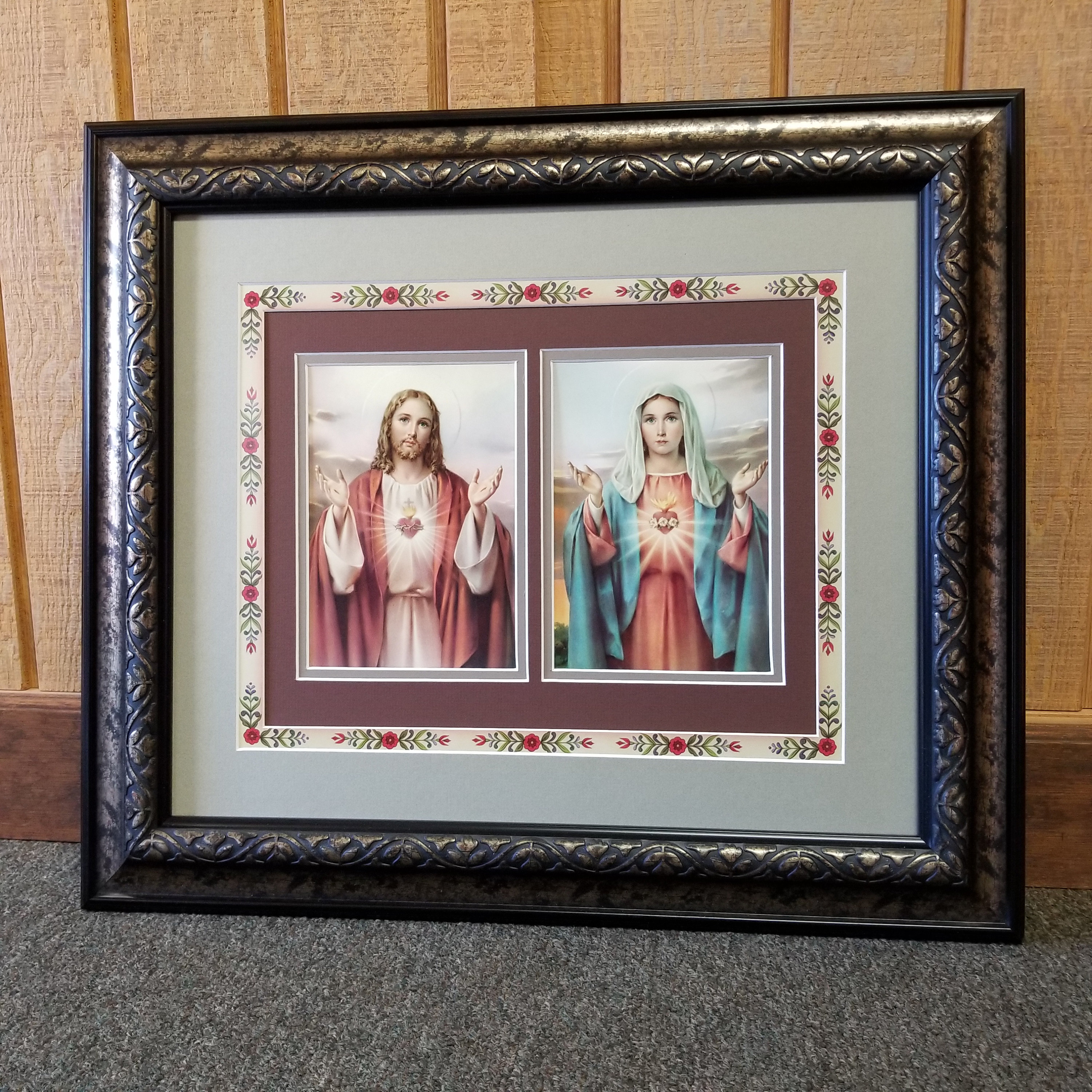 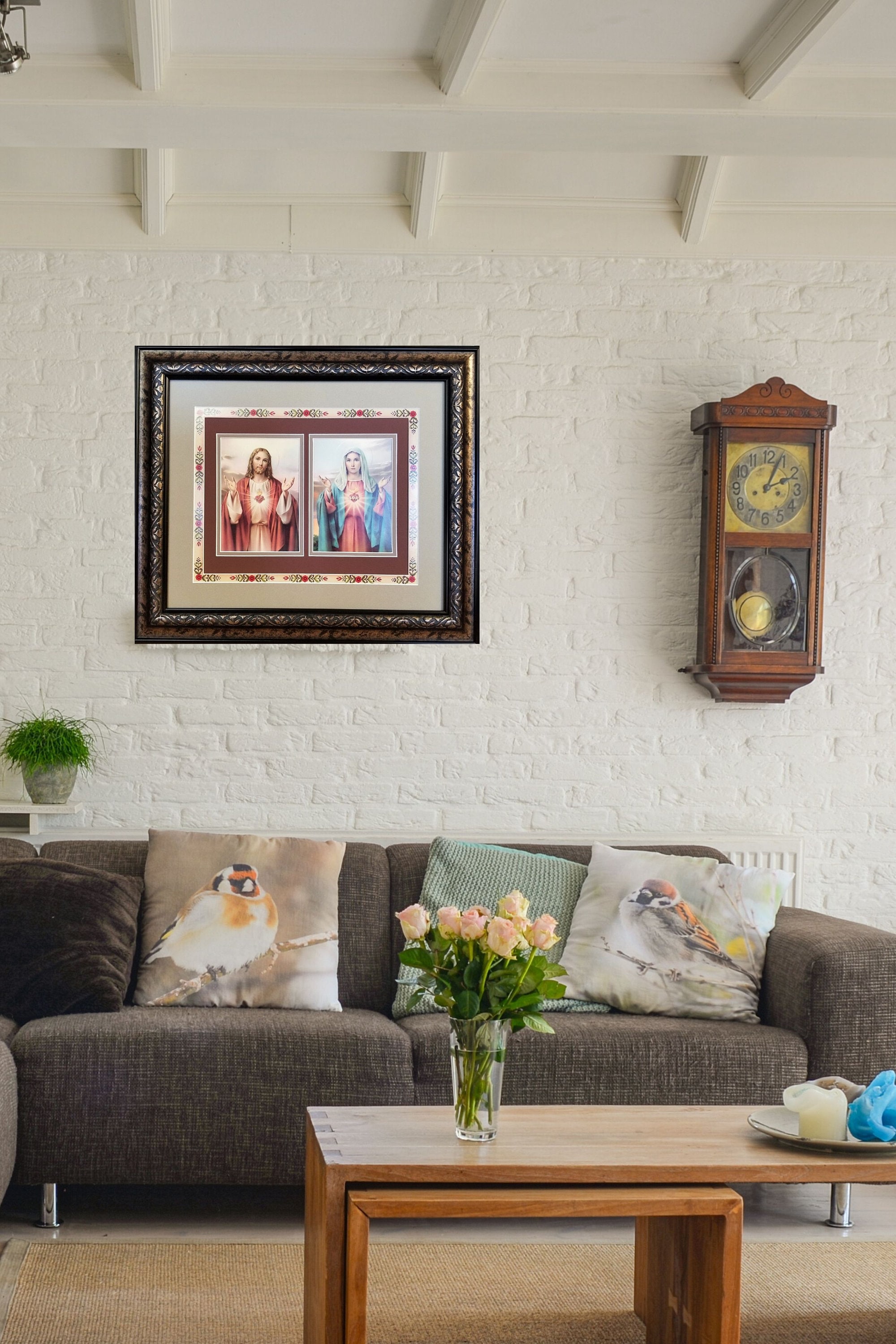 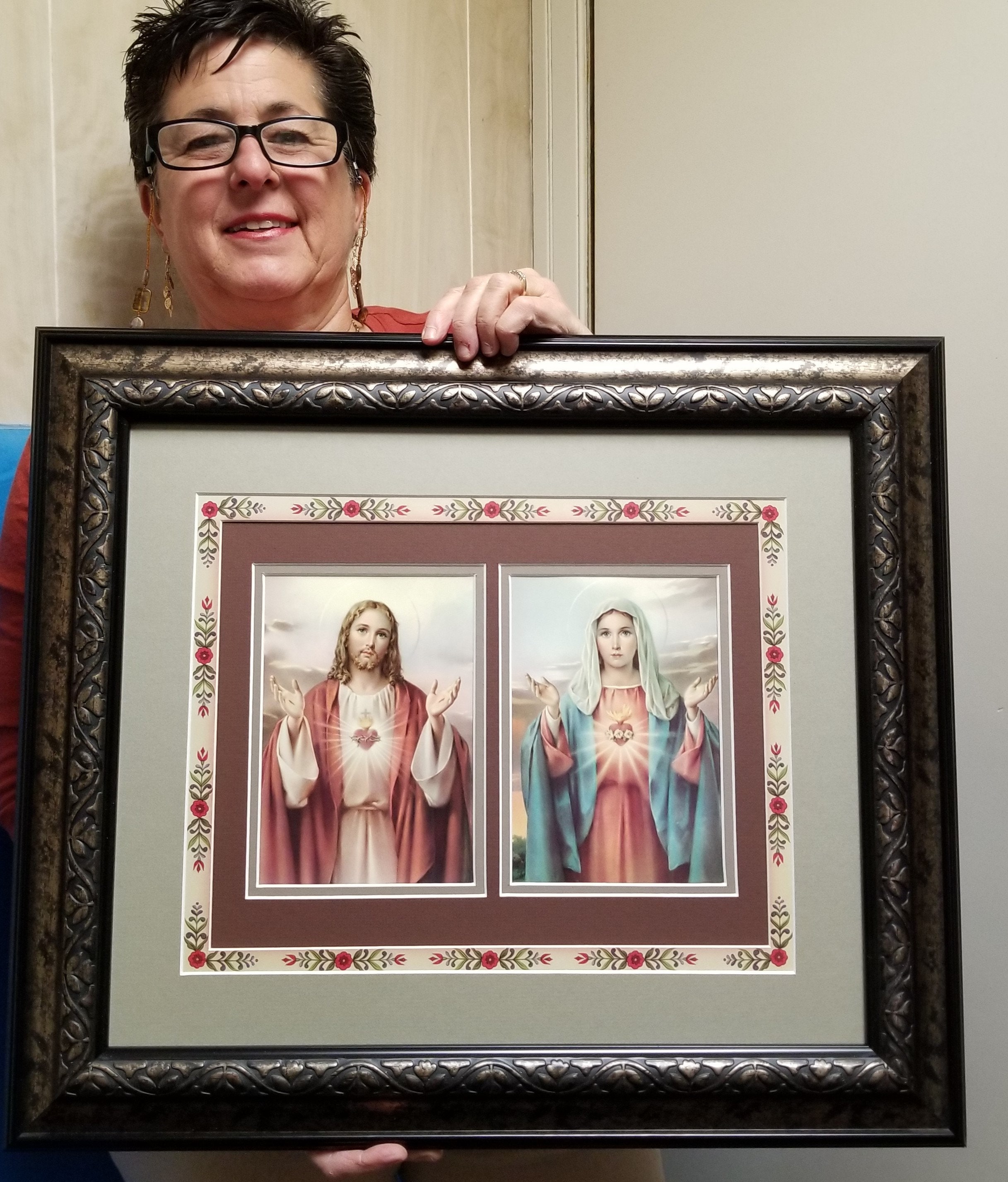 The Sacred Heart of both Jesus and Mary prints are creatively matted and framed. A decorative floral border surrounds the prints in addition to a dusty green and brick colored matting. The frame is a black and gold combination and is ornate. This picture will emphasize the pictures of Jesus and Mary with the creative framing. A beautiful addition to any home. The picture is completed with glass, hook and dust cover and is ready to hang and enjoy for many years.

The flames. The Sacred Heart most obviously brings to mind the Passion of Christ on the cross. There is the crown of thorns, the cross, usually atop the heart, and the wound from the spear that pierced His side. But why is the Sacred Heart always shown as if it’s on fire? That certainly did not happen at the crucifixion.
There are three reasons behind this. First, we have to remember that Christ’s self-offering on the cross was the one-time perfect consummation of all the sacrifices of the Old Testament. This necessarily includes burnt offerings, which were the highest form of sacrifices in ancient Israel, according to The Jewish Encyclopedia. An early form of such sacrifices was what Abraham set out to do with Isaac, hence the wood he had his son collect beforehand.
Second, fire is always associated with the essence of divinity in the Old Testament. Think back to the burning bush that spoke to Moses, the cloud of fire that settled on Sinai, and the flames from above that consumed the sacrifice of Elijah. This explanation fits with the gospel account of the crucifixion, in which the piercing of Christ’s side revealed His heart at the same time that the curtain of the temple was torn, unveiling the holy of holies where God was present.
Finally, the image of fire associated with heart represents Christ’s passionate love for us. One 19th-century French devotional card has these words arched above the Sacred Heart—Voilà ce Cœur qui a tant aimé les hommes, which roughly translates to: “Here is the heart that loved men so much.” One traditional exclamation is, “Sacred Heart of Jesus, burning with love of us, inflame our hearts with love of Thee.” We see this actually happen in the gospels, where the disciples on the road to Emmaus realized that their hearts had been “burning” after their encounter with Jesus. (I’ve also previously written about the Sacred Heart and fire here.)
The rays of light. Look closer at the image of the Sacred Heart. There is something else framing it besides the flames. They are rays of light. In John 8:12, Christ declares that He is the “light of the world.” In Revelation 21:23, we are told that in the new Jerusalem at the end of times there will be no light from the sun or moon because the Lamb of God—that is, Jesus—will be its source of light. Light, like fire, is a symbol of divinity. Think of the Transfiguration and the blinding light that Paul experienced on the road to Damascus. As the light of the world, Christ is also the one who “enlightens” us, revealing God to us. The Sacred Heart constitutes the climax of divine self-revelation, showing us the depths of God’s love for us. (See also this source here, especially for other associations with light.)


The arrows. The crown of thorns and the spear make sense. But sometimes the Sacred Heart is also depicted with arrows. Again, that’s not something we find in the gospels. One explanation is that the arrow represents sin. This is reportedly what our Lord Himself said in a private revelation to St. Mary of St. Peter. (See here for more.) The arrow could also draw upon an ancient Roman metaphor for love, which, according to ancient myth, occurred when the god Cupid shot an arrow through the hearts of lovers (as this author points out).
The crown of thorns. Unlike the arrows, the crown of thorns is reported in the gospels. But in traditional images it encircles the Sacred Heart, whereas in Scripture the crown was fixed to Jesus’ head. One traditional account offers this interpretation, describing those who are devoted to it: “They saw the crown transferred from His head to His heart; they felt that its sharp points had always pierced there; they understood that the Passion was the crucifixion of a heart” (The Heart of the Gospel: Traits of the Sacred Heart by Francis Patrick Donnelly, published in 1911 by the Apostleship of Prayer). In other words, wrapping the crown around the heart emphasizes the fact that Christ felt His wounds to the depths of His heart.
Moreover, after the resurrection, the crown of thorns becomes a crown of victory. Donnelly hints at this as well: “From the weapons of His enemy, from cross and crown and opened Heart, our conquering leader fashioned a trophy which was the best testimony of His love.” In ancient gladiatorial contests, the victor was crowned. In the Revelation 19:12, Christ wears “many crowns” and believers who are victorious over sin and Satan will receive the “crown of life” (Revelation 2:10).
Finally, according to St. Margaret Mary Alacoque, the seventeenth French nun who helped start the devotion, the points of the thorns are the many individual sins of people, pricking the heart of Jesus. As she put it in a letter, recounting the personal vision she had received, “I saw this divine Heart as on a throne of flames, more brilliant than the sun and transparent as crystal. It had Its adorable wound and was encircled with a crown of thorns, which signified the pricks our sins caused Him.”
The cross. Like the thorns, the cross is both rooted in the gospels but also displayed in a way that does not follow them in every detail. There is almost an inversion of the crucifixion. In the gospels, Christ hung on the cross, His heart correspondingly dwarfed by its beams. But in images of the Sacred Heart, it is now enlarged and the cross has shrunk. Moreover, rather than the heart being nailed to the cross, the cross now seems ‘planted’ in the heart—as St. Margaret Mary Alacoque put it—if to say to us that the entire reality of the crucifixion derives its meaning from and—cannot be understood apart from—the heart of Jesus. As Donnelly wrote, “The Heart [is] … forever supporting the weight of a Cross.” Truly, it is the heart of Jesus that makes the cross meaningful for us today.

I gladly accept returns and exchanges

Ship items back to me within: 14 days of delivery

But please contact me if you have any problems with your order.

The following items can't be returned or exchanged

Because of the nature of these items, unless they arrive damaged or defective, I can't accept returns for:

I am so happy with this purchase. It was a birthday gift for my husband, and he absolutely loves it! The matting and framing work is exquisite and complement the Sacred Heart and Immaculate Heart images well. The colors are just as I’d hope they’d be in person. It was safely package and arrived on time. Thank you so much!!

0 items in your cart